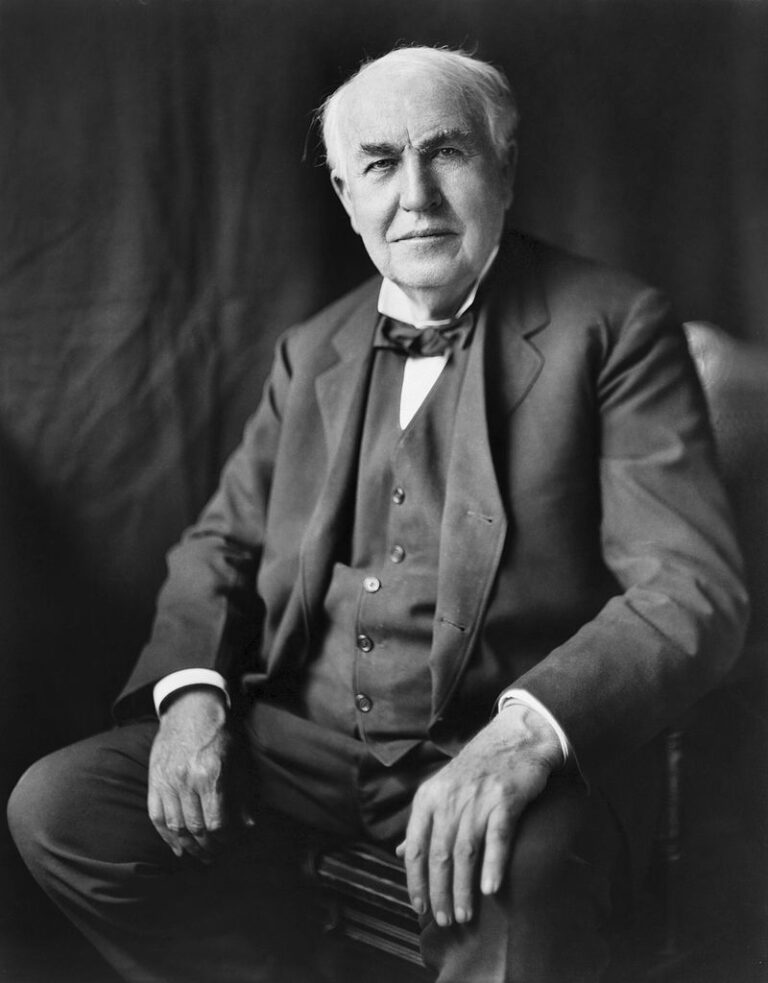 Thomas Alva Edison was an American inventor, scientist, and businessman who developed many devices that greatly influenced life around the world, including the phonograph, the motion picture camera, and a long-lasting, practical electric light bulb. Dubbed “The Wizard of Menlo Park” (now Edison, New Jersey) by a newspaper reporter, he was one of the first inventors to apply the principles of mass production and large teamwork to the process of invention, and therefore is often credited with the creation of the first industrial research laboratory.

Edison is considered one of the most prolific inventors in history, holding 1,093 US patents in his name, as well as many patents in the United Kingdom, France, and Germany. He is credited with numerous inventions that contributed to mass communication and, in particular, telecommunications. These included a stock ticker, a mechanical vote recorder, a battery for an electric car, electrical power, recorded music and motion pictures. His advanced work in these fields was an outgrowth of his early career as a telegraph operator. Edison originated the concept and implementation of electric-power generation and distribution to homes, businesses, and factories – a crucial development in the modern industrialized world. His first power station was on Manhattan Island, New York.

Thomas Edison was born in Milan, Ohio and grew up in Port Huron, Michigan. He was the seventh and last child of Samuel Ogden Edison, Jr. (1804–96, born in Marshalltown, Nova Scotia, Canada) and Nancy Matthews Elliott (1810–1871).  His father had to escape from Canada because he took part in the unsuccessful Mackenzie Rebellion of 1837. Edison considered himself to be of Dutch ancestry.   In school, the young Edison’s mind often wandered, and his teacher, the Reverend Engle, was overheard calling him “addled”. This ended Edison’s three months of official schooling. Edison recalled later, “My mother was the making of me. She was so true, so sure of me; and I felt I had something to live for, someone I must not disappoint.” His mother homeschooled him.  Much of his education came from reading R.G. Parker’s School of Natural Philosophy and The Cooper Union. Edison developed hearing problems at an early age. The cause of his deafness has been attributed to a bout of scarlet fever during childhood and recurring untreated middle-ear infections. Around the middle of his career Edison attributed the hearing impairment to being struck on the ears by a train conductor when his chemical laboratory in a boxcar caught fire and he was thrown off the train in Smiths Creek, Michigan, along with his apparatus and chemicals. In his later years he modified the story to say the injury occurred when the conductor, in helping him onto a moving train, lifted him by the ears.  Edison’s family was forced to move to Port Huron, Michigan, when the railroad bypassed Milan in 1854, but his life there was bittersweet. He sold candy and newspapers on trains running from Port Huron to Detroit, and he sold vegetables to supplement his income. This began Edison’s long streak of entrepreneurial ventures as he discovered his talents as a businessman. These talents eventually led him to found 14 companies, including General Electric, which is still in existence and is one of the largest publicly traded companies in the world.

Edison became a telegraph operator after he saved three-year-old Jimmie MacKenzie from being struck by a runaway train. Jimmie’s father, station agent J.U. MacKenzie of Mount Clemens, Michigan, was so grateful that he trained Edison as a telegraph operator. Edison’s first telegraphy job away from Port Huron was at Stratford Junction, Ontario, on the Grand Trunk Railway.   In 1866, at the age of 19, Thomas Edison moved to Louisville, Kentucky, where, as an employee of Western Union, he worked the Associated Press bureau news wire. Edison requested the night shift, which allowed him plenty of time to spend at his two favorite pastimes—reading and experimenting. Eventually, the latter pre-occupation cost him his job. One night in 1867, he was working with a lead-acid battery when he spilled sulfuric acid onto the floor. It ran between the floorboards and onto his boss’s desk below. The next morning Edison was fired.

One of his mentors during those early years was a fellow telegrapher and inventor named Franklin Leonard Pope, who allowed the impoverished youth to live and work in the basement of his Elizabeth, New Jersey home. Some of Edison’s earliest inventions were related to telegraphy, including a stock ticker. His first patent was for the electric vote recorder, (U. S. Patent 90,646), which was granted on June 1, 1869.