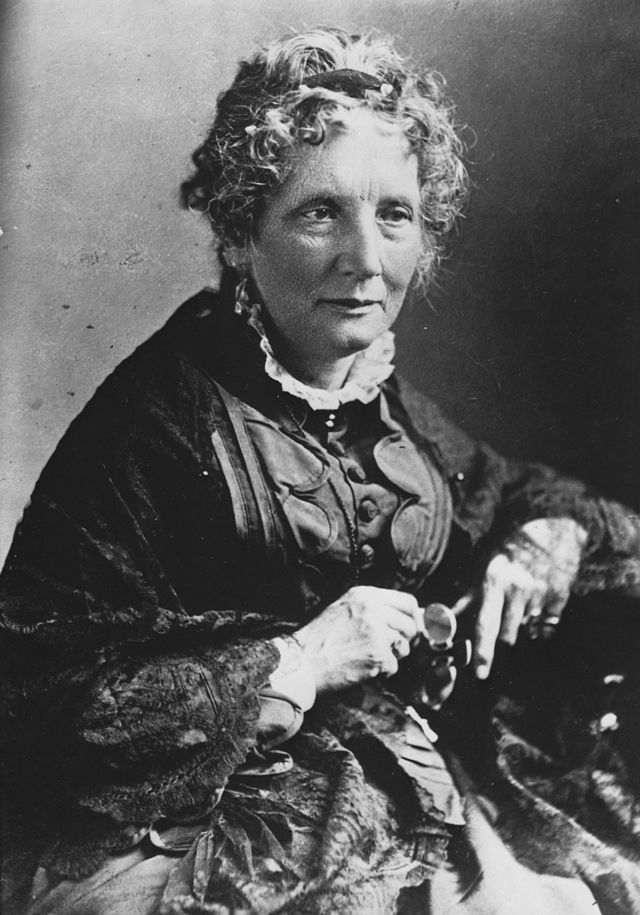 Harriet Beecher Stowe was born June 14, 1811, the seventh child of a famous protestant preacher. Harriet worked as a teacher with her older sister Catharine: her earliest publication was a geography for children, issued under her sister’s name in 1833. In 1836, Harriet married widower Calvin Stowe: they eventually had seven children. Stowe helped to support her family financially by writing for local and religious periodicals. During her life, she wrote poems, travel books, biographical sketches, and children’s books, as well as adult novels. She met and corresponded with people as varied as Lady Byron, Oliver Wendell Holmes, and George Eliot. She died at the age of 85, in Hartford Conneticutt.

While she wrote at least ten adult novels, Harriet Beecher Stowe is predominantly known for her first, Uncle Tom’s Cabin (1852). Begun as a serial for the Washington anti-slavery weekly, the National Era, it focused public interest on the issue of slavery, and was deeply controversial. In writing the book, Stowe drew on her personal experience: she was familiar with slavery, the antislavery movement, and the underground railroad because Kentucky, across the Ohio River from Cincinnati, Ohio, where Stowe had lived, was a slave state. Following publication of the book, she became a celebrity, speaking against slavery both in America and Europe. She wrote A Key to Uncle Tom’s Cabin (1853) extensively documenting the realities on which the book was based, to refute critics who tried to argue that it was inauthentic; and published a second anti-slavery novel, Dred in1856. In 1862, when she visited President Lincoln, legend claims that he greeted her as “the little lady who made this big war”: the war between the states. Campaigners for other social changes, such as Caroline Norton, respected and drew upon her work.

The historical significance of Stowe’s antislavery writing has tended to draw attention away from her other work, and from her work’s literary significance. Her work is admittedly uneven. At its worst, it indulges in a romanticized Christian sensibility that was much in favour with the audience of her time, but that finds little sympathy or credibility with modern readers. At her best, Stowe was a early and effective realist. Her settings are often accurately and detailedly described. Her portraits of local social life, particularly with minor characters, reflect an awareness of the complexity of the culture she lived in, and an ability to communicate that culture to others. In her commitment to realism, and her serious narrative use of local dialect, Stowe predated works like Mark Twain’s Huckleberry Finn by 30 years, and influenced later regionalist writers including Sarah Orne Jewett and Mary Wilkins Freeman.