How a Bill Becomes a Law

Prepare for Your Visit

How a Bill Becomes a Law 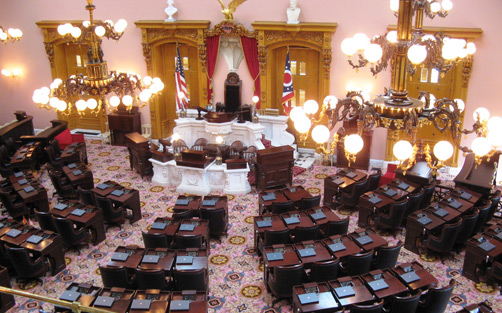 Senators/Representatives put their ideas into writing in the form of a bill. Once a bill is drafted, it is introduced and given a unique number before being assigned to a committee that handles bills on that topic. To become law in Ohio, a bill must receive three "considerations" in each house of the General Assembly. Introduction of a bill constitutes "first consideration."

The sources for bills are diverse. A legislator may introduce legislation to solve the problems of people or groups in their district; a citizens' group can bring an issue to the attention of a legislator, or the governor may request legislation. A bill can be introduced in either house by a member of the Ohio House of Representatives or the Ohio Senate Legislators.

In a standing committee legislators discuss the issues of the bill with one another and with individuals or representatives of interest groups. Through this process legislators may make changes to the bill (called amending the bill)

Bills favorably reported out of a standing committee are sent to the Rules Committee. This committee decides what bills will be considered by the entire membership of the House or Senate and schedules them to appear on the calendar for a vote.

Bills are often debated and amended on the floor, according to the procedures of each house. A bill must receive a majority of votes to pass.

If the bill has passed, the bill then moves to the other house, where the committee assignment and hearing process begin all over again.

Bills favorably reported out of a standing committee are sent to the Rules Committee. This committee decides what bills will be considered by the entire membership of the House or Senate and schedules them to appear on the calendar for a vote.

Both houses must agree...If the bill is amended in any way by the second house, it is sent to the house of origin for approval of the amendments, known as "concurrence."

If the original house votes down the changes, House and Senate leadership appoint a conference committee made up of members of both bodies to reconcile their differences. At the end of this process both houses must be in agreement on the final content of the bill.

The Governor Signs or Vetoes

A bill that passed both houses is sent to the Governor in the form of an "act." The Governor can sign the act into law or veto it. If the Governor takes no action within 10 days, the act becomes law without his or her signature…

If the bill makes its way through all of these steps it then becomes a law! 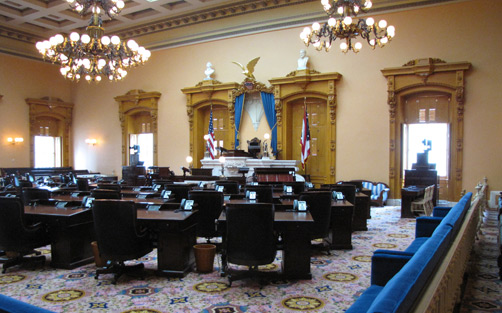 Representing North Bend, Ohio, Harrison served in the Ohio House of Representatives from 1816 to 1819 and the Ohio Senate from 1825 to 1828. He became the ninth President of the United States on March 4, 1841 and died on April 4, 1841. He was the first U.S. President to die in office, only one month into his presidency. Though he gave the longest inaugural speech of any president in history (8,445 words), he served the shortest term of any president. He was also the first president to use campaign slogans – “Tippecanoe and Tyler Too.” He and his grandson Benjamin Harrison are the only grandfather-grandson duo to serve as Presidents of the United States.

Born in 1822 in Point Pleasant, Ohio, Grant was the son of a tanner. He went to West Point rather against his will and graduated in the middle of his class. In the Mexican War he fought under Gen. Zachary Taylor. At the outbreak of the Civil War, Grant was working in his father’s leather store in Galena, Illinois. He was appointed by the Governor to command an unruly volunteer regiment. Grant whipped it into shape and by September 1861 he had risen to the rank of brigadier general of volunteers.

Abraham Lincoln appointed him General-in-Chief in March 1864. Grant directed Sherman to drive through the South while he himself, with the Army of the Potomac, pinned down Gen. Robert E. Lee’s Army of Northern Virginia. Finally, on April 9, 1865, at Appomattox Court House, Lee surrendered. Grant wrote out magnanimous terms of surrender that would prevent treason trials. As President, Grant presided over the Government much as he had run the Army.

Hayes was born on October 4, 1822 in Delaware, Ohio and was raised by his mother and uncle, due to his father’s death. Regardless, he proved to be a successful individual by starting his Law degree and later becoming a major, a major general in the Civil War; a two-term Ohio Representative, and a three-term Ohio Governor, before becoming President.

The country benefited from his actions on strengthening businesses and industries, taking action for civil rights and allowing women attorneys to be involved in the U.S. Supreme Court. His involvement and dedication to the freeing of slaves in the Civil War lead him to be the only President to be wounded four times while fighting.

Born November 19, 1831 in Cuyahoga County, James A. Garfield became a dedicated student so that he would avoid poverty. He graduated from Williams College in Massachusetts in 1856 before returning to the Western Reserve Eclectic Institute (later Hiram College) in Ohio as a classics professor. Within a year he was became the school’s president. Garfield was elected to the Ohio Senate in 1859 as a Republican. During the secession crisis, he advocated coercing the seceding states back into the Union.

Garfield then became Lieutenant Colonel when the Civil War began and worked his way up to Major General after all of his success in the war. Garfield was nominated and won a seat in the U.S. House of Representatives which continued for nine terms and then eventually landed a seat in the U.S. Senate. All that he accomplished in legislation lead him to his Presidency.

Unfortunately, on July 2, 1881, Garfield was assassinated by Charles Guiteau, a mentally unstable man from Illinois. Garfield’s term as the 20th President ended short when he passed away on September 19, 1881.

Born and raised on the family farm in North Bend, Ohio, Harrison was the grandson of President William Henry Harrison, also of North Bend. They are the only grandfather-grandson duo to serve as Presidents of the United States. After marrying in 1853, he moved to Indianapolis and spent the greater part of his life as a pillar in the Indianapolis community. Out of the eight Ohio presidents, he is the least associated with Ohio and is often known as Indiana’s First Citizen.

Born in Niles, Ohio, William McKinley had a stunning career as a teacher, attorney, Stark County prosecutor and a Civil War Major—all before being elected to serve in the U.S. House of Representatives and then serving two terms as Ohio Governor. He was the last Civil War veteran to serve as President. He brought the nation out of isolationism into an emerging world power, retained the gold standard, championed railroad safety and tariffs to support U.S. jobs.

The 25th U.S. President was legendary for his kindness, his front porch campaign, his devotion to his invalid wife and for the red carnation he always wore in his lapel. The Ohio legislature named the red carnation as the state flower following McKinley’s death on September 19 after an assassination attempt on September 6, 1901.

William Howard Taft, born in 1857, was a son of a distinguished judge, a graduate of Yale, a news reporter, a lawyer, a professor and a Dean of the University of Cincinnati. He is the only President to also serve as Chief Justice of the United States Supreme Court.

His route to the White House was via administrative posts. President McKinley sent him to the Philippines in 1900 as chief civil administrator. Sympathetic toward the Filipinos, he improved the economy, built roads and schools, and gave the people at least some participation in government. President Roosevelt made him Secretary of War, and by 1907 had decided that Taft should be his successor. The Republican Convention nominated him the next year.

Taft, free of the Presidency, served as Professor of Law at Yale until President Harding made him Chief Justice of the United States, a position he held until just before his death in 1930. To Taft, the appointment was his greatest honor; he wrote: “I don’t remember that I ever was President.”

In August of 1923 during his presidency, he died in San Francisco of a heart attack.

Prepare for Your Visit

Click on a link below to download the corresponding PDF lesson plan related to the Statehouse.
Top of Page