Situated on Capitol Square in Columbus, the Ohio Statehouse is a beautifully-restored monument to the people of Ohio, their vision of our democracy, and the dream of a better place to live and work. But more than a monument to the past, it is a living museum where the people’s business is conducted.

History of the Capitol Square Foundation

The Capitol Square Foundation was established to increase public awareness of and to involve citizens in the history of the Ohio Statehouse. Its purpose is to raise funds to obtain, restore and maintain artifacts and other items related to the history and enhancement of this grand monument and its adjoining grounds, so that the seat of Ohio’s government may reflect the dignity of the state and its citizens.

The Capitol Square Foundation, during the restoration of the Ohio Statehouse, raised over $10 million dollars as part of a $120 Million dollar effort to completely return Ohio’s historic Statehouse to its original grandeur.

In 2003 the foundation launched the Great Ohioan Award to commemorate the role of Ohioans in an event or series of events of lasting significance in world, American or Ohio history. The foundation’s first honoree for this award is a group of individuals which commemorate Ohio’s role in the birth and development of aviation: the honorable John Glenn, the Wright Brothers and Neil Armstrong. It was fitting to honor these Ohioans in 2003, Ohio’s bicentennial celebration as well as the 100th anniversary of powered flight. The foundation’s dinner was a tribute to these aviation pioneers and celebrated how they changed our world.

Historically, the Capitol Square Foundation has honored individuals who have demonstrated a commitment to restoring and maintaining the grandeur of our state Capitol with the Richard H. Finan Award. This award recognized the efforts of this preeminent leader in the cause for the Ohio Statehouse renovation. His perseverance and continued efforts in preserving Ohio’s heritage is a magnificent legacy for future generations. In addition to Senator Richard Finan as the award’s first recipient in 1994, past award winners include the Honorable Vern Riffe (1995); the Honorable Stanley Aronoff (1996); the Honorable Jo Ann Davidson (1997); the Honorable Harry Meshel (1998); and the honorable Richard F. Celeste (2001).

In 2005 Foundation began a capital campaign seeking $2.75 million in private contributions to Enrich the Experience of visitors to the Ohio Statehouse. The Enriching Campaign raised more than $4.5 million dollars for a new Visitors and Education Center and to build the Statehouse Museum, which opened in June 2009. 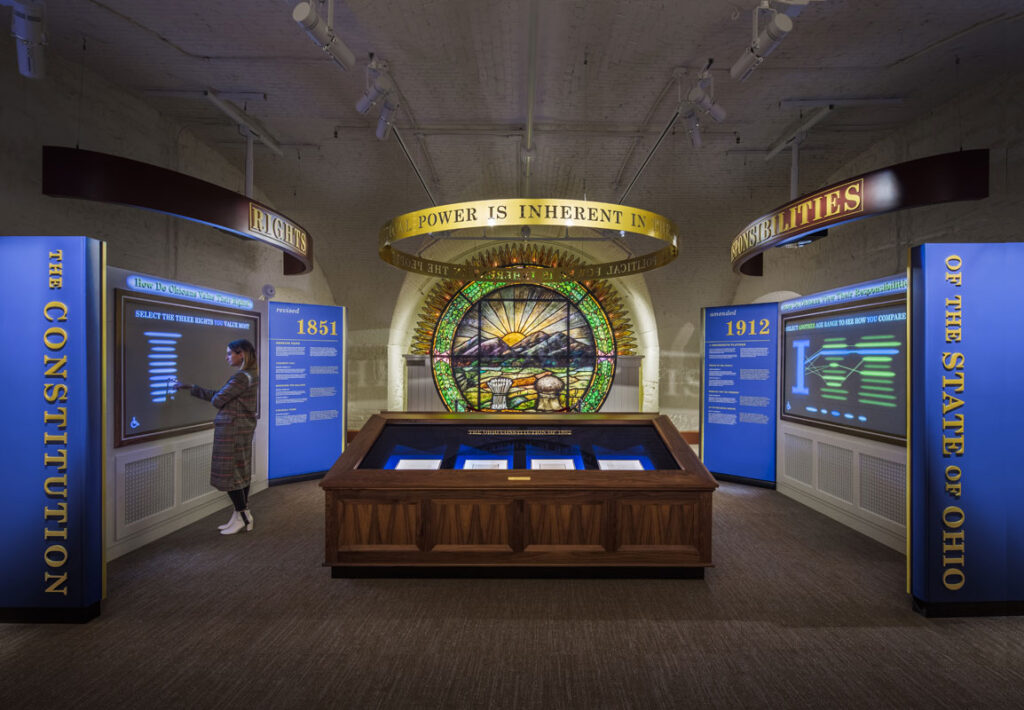 The educational content at the heart of this project is designed specifically to present the building’s public edifice as a “house” for the people of Ohio. While the Statehouse has welcomed more than 1,000,000 visitors since it first opened, it is the quality of the educational content that sets this resource apart, and which must be preserved and enhanced for the future.

In recent years, the Foundation increased the Museum’s footprint through the addition of the Heart of Democracy (2010), a series of glowing glass panels that feature quotes from notable historical literary, historical and political figures; the addition of the Thomas Worthington Learning Center (2013), an informal education classroom and visitor orientation space; and the Honoring Ohioans exhibit (2014). Funded by a generous contribution from Nationwide Insurance, Honoring Ohioans was designed in collaboration with the Museum’s Education Department, Nationwide’s marketing and technology team, and Roto, an award winning exhibit design firm in Dublin, Ohio.

The Capitol Square Foundation has rededicated itself to the proposition that civics education is a continuum, and that as such it must be committed to upgrading and improving the Ohio Statehouse Museum. As a result, CSF has since embarked on a survey, led by Roto, of exhibit design and content, website design and content, usage and flow patterns of visitors (both school tours and walk-in guests), and all related technology. The findings indicate the need for a major renewal of the galleries at a cost of $1 million.

As part of this rededication of efforts, in May 2014 CSF convened and hosted a summit of interested public and private entities to create a greater presence for civics education. This forum led to a partnership among the Capitol Square Foundation, the John Glenn College at The Ohio State University, and iCivics. Founded by Justice Sandra Day O’Conner, iCivics is a nonprofit dedicated to invigorating civics learning through free interactive resources and online learning tools, games, simulations and hands-on exercises (icivic.org) used by over 62,000 educators and more than 6.5 million students nationwide. Of equal note is the involvement of the John Glenn College, which equips its students through programs to teach tomorrow’s citizen-leaders and public policy professionals. The result was iCivics Ohio, an online application of Ohio-specific civics curriculum and corresponding federal civics curriculum that will specifically relate to the Museum’s content. iCivics Ohio is the first application of its kind in the United States.

The Capitol Square Foundation is not a state agency and receives no government funding. It is incorporated in Ohio as a 501(c)(3) non-profit, charitable organization under the Internal Revenue Service. Any personal or corporate donations are tax deductible to the fullest extent under the law.