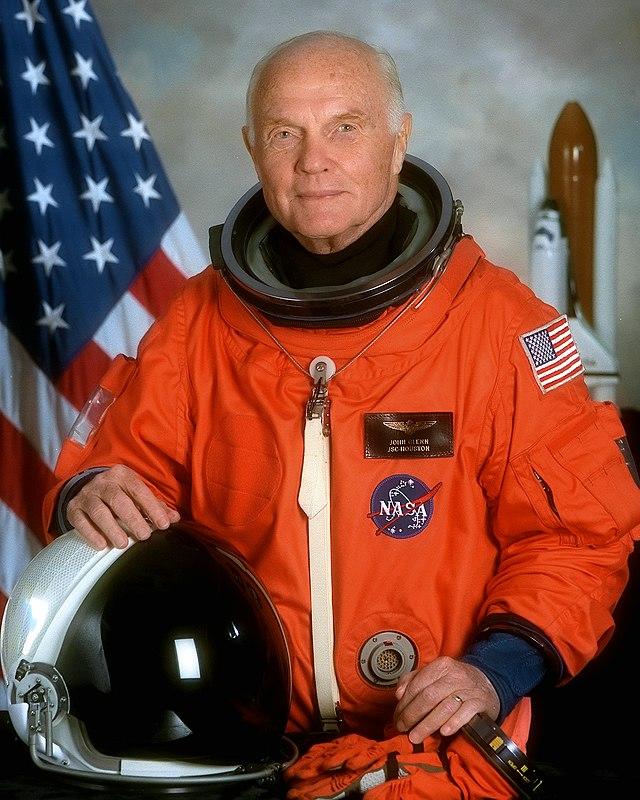 Astronaut, businessman and U.S. senator, John Herschel Glenn, Jr., was born on July 18, 1921, in Cambridge, Ohio and reared nearby in the small town of New Concord. After graduating from high school in 1939 he enrolled at Muskingum College to study chemical engineering, but left to enlist for naval aviation training following America’s entry into World War II.  Commissioned in the Marine Corps Reserve, Glenn flew 59 combat missions stationed in the Pacific. After returning to the United States, he served principally as a flight instructor and was promoted to captain in 1945. He remained on active duty until after the war after which he was brought into the regular Marine Corps. In the Korean conflict Glenn flew jets in ground support missions for the Marines and in air-to-air combat in the Air Force’s new F-86 fighters as an exchange pilot, completing a total of 90 missions between February and September 1953.

After his return from Korea Glenn was assigned to the Navy’s Patuxent River test pilot school and later to the Bureau of Aeronautics, where he developed a project in which an F8U Crusader jet fighter would try to break the non-stop transcontinental speed record, refueling in mid-air three times. He made the attempt himself and on July 16, 1957, flew from Los Angeles to New York in 3 hours, 23 minutes.  In 1958 the U.S. government began Project Mercury, a plan to place a man in orbit around the earth. Glenn was named one of the seven Mercury astronauts. He was later chosen for the first orbital mission, “Friendship 7,” circling the earth three times on February 20, 1962. It was these feats which led President John F. Kennedy to admire Glenn and he advised him to finish his Marine career and seek public office. But Glenn’s end to his Marine career would first lead him to the private sector, where he became an executive of Royal Crown Cola International and partial owner of motels near Orlando, Florida.  Having made several unsuccessful bids for public office, Glenn made his third try in 1974. This time securing a seat in the U.S. Senate. His voting record tended to be conservative on national defense and foreign affairs, but more liberal on domestic social issues. He was the principal author of the Nuclear Nonproliferation Act of 1978, which sought to limit the spread of nuclear weapons.

After again winning his seat both in the 1986 and 1992 elections, Glenn remained a strong voice in the Congress for a permanent research station in space and supported increased funding for education, scientific research and space exploration.  In 1997 he announced his retirement from the Senate to pursue other interests. One of these other interests, as it turns out, was a proposition to NASA that he be sent into space again so that they could study the effects of exposure to weightlessness on older Americans. Still in good physical shape, he got his wish and re-entered the space program. In 1998, Glenn became the oldest person to go into space, 36 years after his first historic flight.  Glenn married Anna Margaret (Annie) Castor. They had two children, John David and Carolyn Ann.