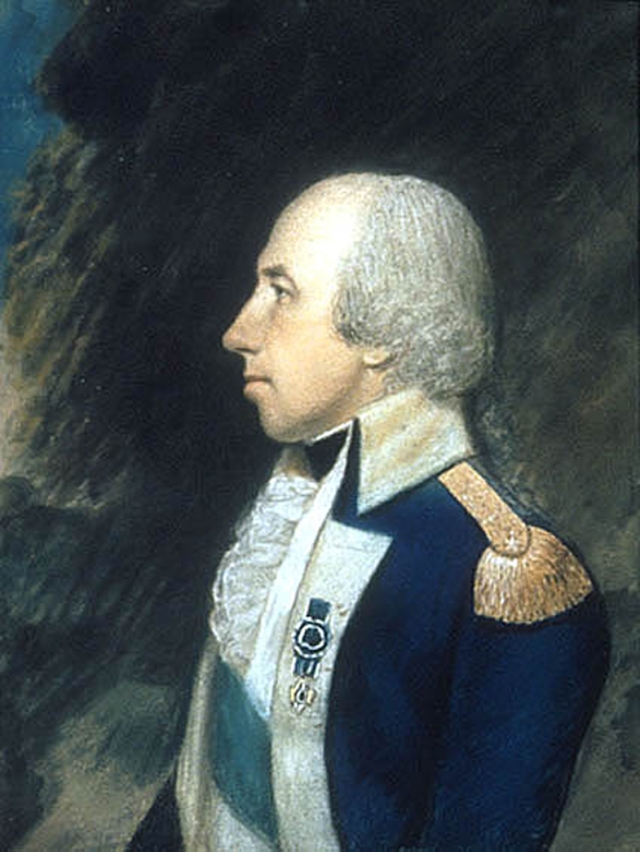 General Rufus Putnam was the primary planner and organizer, and leader of the first settlement of the Ohio Company of Associates on its recently acquired land, north and west of the Ohio River. In this, he was instrumental in bringing a long held dream of many to fruition, and it is from the date of those pioneers landing, on April 17, 1788, at the confluence of the Muskingum and Ohio rivers, that the state of Ohio dates her begin-nings. General Putnam is rightfully called a Founding Father, and he certainly should be considered among the Great Ohioans.

Rufus Putnam was born April 9, 1738, in Massachusetts, descending from a line of Putnams who first arrived in 1634. His father died when he was seven years old, and for the next two years he lived with his grandparents. While with them, he learned to read, but when he returned to live with his mother and illiterate stepfather, schooling was no longer possible. Eager to continue his learning, however, he bought, surreptitiously, spelling and arithmetic books with money he was able to earn by selling game he shot. He taught himself to write and to “do figures”.

When he was fifteen he was apprenticed to a millwright and during the next four years he learned that trade and to do farm work. In whatever spare time he had, however, he continued his determined pursuit of self-education, reading any books he could borrow and adding geography to his studies.

His apprenticeship was completed in 1757, and at age nineteen, he forthwith enlisted as a private soldier in the provincial army, fighting for Great Britain in the French and Indian War. After the war, he returned to Massachusetts to support himself as a mill-wright. Now able to continue his drive for self-improvement, he studied surveying and navigation, and furthered his knowledge of mathematics. In 1773 he joined “The Military Company of Adventurers”, composed of other veterans of the French and Indian War, who hoped to receive grants from Great Britain for land in the Florida territory. No grants were forthcoming, so after exploring parts of that territory for a time he returned home.

Putman was among the first to volunteer in defense of the colonies in 1775, after the battles of Lexington and Concord. He was commissioned a lieutenant colonel. The next year he received a Congressional appointment of engineer and was promoted to colonel. He was involved in much action during the Revolutionary War, and gained the respect, admiration, and friendship of General George Washington.

In 1783, as the Continental army was being down sized, more than two hundred and fifty soldiers and officers jointly petitioned Congress for a grant of land for settling in”the western country”, of which the United States government had recently gained possession. The idea was not new to Rufus Putnam. He, and fellow surveyor, Col. Thomas Hutchins, who was then in the process of mapping the Ohio Territory, had already given much thought to the possibility and procedures needed to accomplish such an undertaking. On June 17, 1783, Putnam sent a copy of the petition directly to Gen. George Washington, with a cover letter asking him to use his influence on Congress to pass favorable legislation on the soldiers’ petition.

The letter is a masterpiece. It alone qualifies Rufus Putnam as a Great Ohioan.

Putnam’s years of study of mathematics, geography, and surveying were put to good use. The letter is very long, clear, complete. In it he lays out a design for settling the Ohio Territory. He lists the reasons and necessities for such an undertaking; the dangers, from not only Indians, but also Great Britain and Spain, if delayed; the advantages and disad-vantages of sending people into “wild country-; the problems and solutions. He notes the possible acreage and offers a plan for mapping the land and surveying lots. Developing further Hutchins’ suggestion of six-mile squares, Putman is credited as being the first to recommend the making up of Civil Townships, denoting boundaries AND government. This plan was not used, however, in the Original Surveyed Townships, done in the Seven Ranges, as stipulated by the Ordinance of 1785. Putnam’s system was incorporated in the surveys for the Ohio Company of Associates, 1787, however, and except for the num-bering of the sections and the setting aside of ministerial and wastelands, his Rectangular Survey Plan has been used ever since in the surveying of public lands.

The soldiers’ 1783 petition to Congress was not acted upon. Putnam, however, con-tinued to agitate about acquiring land west of the Ohio River, both for the soldiers, and for himself, as a millwright/farmer and a land speculator. When Gen. Benjamin Tupper, who was the Surveyor of Western Lands, as per the Ordinance of 1785, returned from The Seven Ranges to Massachusetts for Christmas, 1785, he stopped to visit his friend, Rufus Putnam. The two came up with a possible procedure to accommodate the petitioners: have them form a stock company and use their continental scrip and bonus promises to BUY a section of land in the Northwest Territory from the Unites States government.

Accordingly, in late January, 1786 a letter, signed by Putnam and Tupper, appeared in newspapers throughout Massachusetts urging all officers and soldiers who held such warrants, and “all other good citizens who wish to become adventurers in that delightful region,” to meet in Boston March 1….And so the Ohio Company of Associates was formed.

Its history is well known. Working closely with Congress, pushing, consulting and sometimes conniving, and even offering much of the language, Company representatives succeeded in having the Ordinance of 1787 passed. A political document, it provides the structure for laws and government for new territories until they reach a specified growth to become an equal state in the United States. At the same time (and by the same methods) the purchase of approximately one and a half million acres of land by the Ohio Company of Associates, in the southeastern part of the Ohio (Northwest) Territory, was accomplished.

The name Manasseh Cutler is most often associated with the Ohio Company of Associates, and Ohio University, the first university west of the Allegheny Mountains, but Rufus Putnam was a constant force for the movement, being responsible for seeing that the plans were carried out. Even before purchase negotiations with Congress were completed, Putnam was organizing his thoughts as to what would have to be done and how. The sale contract was signed October 27, 1787, and the first workers were ready to leave Massachusetts in December for the Ohio Territory. Gen. Putnam was recognized as the leader, and named superintendent of the project.

The day after the men of the Ohio Company of Associates reached the western shore of the Ohio, at present day Marietta, Putman had them, and those who arrived shortly thereafter, building a stockade, clearing land for houses and crops, and making ready the land for settlement. Surveyors, under his direction, began to draw the lines of property so owners could take up their land forthwith. He recognized the uniqueness of the mounds as work of earlier natives and had them preserved. While directing the physical work, he also saw to it that governmental aspects were not overlooked, because he had long felt that that would be the “make or break” part of development.

Over the next thirty or so years, he led, supervised, and participated. He saw soldiers and “adventurers” settled on land of their own, and villages thrive, becoming agricultural or river towns; businesses and industry begin: a university opened, and his name is seen frequently in the early minutes of the Board of Trustees of Ohio University as the town of Athens and university grew. He was co-founder of the Muskingum Academy in 1798; a representative to the 1802 state constitution convention. His signature is on many land surveys and contracts of early years of the state. In 1799 he was appointed by Congress to be the first Surveyor General, overseeing the surveying of all public lands, and he repre-sented the United States in many parleys with the Indians. He deeply regretted the horrors some of the pioneers suffered in the early years, both from Indians and the lack of necessities, and did what he could to protect and provide.

For all of that and more, Gen. Putnam saw the intent of the Ohio Company of Associates accomplished.

Rufus Putnam was married twice. His first wife died shortly after they were married in 1761. In 1765 he married Persis Rice, with whom, during their fifty-five years together, had nine children. Quarters for his family were built as part of the first stockade in 1788 and the house still stands, the only remaining original building. It is part of and preserved by the Campus Martius Museum in Marietta and is visited by hundreds of people each year. He died in 1824 in Marietta, the city he founded.

Gen. Rufus Putnam surely made a contribution to the history of Ohio, and our whole country, and should be recognized in the Statehouse. He lived long enough to see an idea become the nucleus of a great movement west. What he set out to do, he did, and from that landing in 1788, Ohio has grown to take its place among the greats.

And so should he.