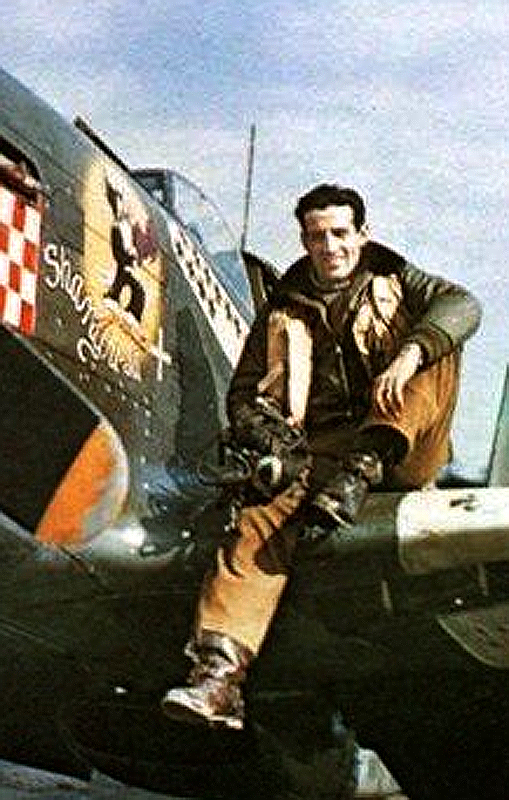 Gentile was born in Piqua, Ohio. After a fascination with flying as a child, his father provided him with his own plane, an Aerosport Biplane. He managed to log over 300 hours flying time by July 1941, when he attempted to join the Army Air Force. The U.S. military required two years of college for its pilots, which Gentile did not have, therefore Gentile originally enlisted in the Royal Canadian Air Force and was posted to the UK in 1941. Gentile flew the Supermarine Spitfire Mark V with No. 133 Squadron, one of the famed “Eagle Squadron” during 1942. His first kills (a Ju 88 and Fw 190) were on August 1, 1942, during Operation Jubilee.

In September 1942, the Eagle squadrons transferred to the USAAF, becoming the 4th Fighter Group. Gentile became a flight commander in September 1943, now flying the P-47 Thunderbolt. Having been Spitfire pilots, Gentile and the other pilots of the 4th were displeased when they transitioned to the heavy P-47. By late 1943 Group Commander Col. Don Blakeslee pushed for re-equipment with the lighter, more maneuverable, P-51 Mustang. Conversion to the P-51B at the end of February 1944 allowed Gentile to build a tally of 15.5 additional aircraft destroyed between March 3 and April 8, 1944. After downing 3 planes on April 8, he was the top scoring 8th Air Force ace when he crashed his personal P-51, named “Shangri La”, on April 13, 1944 while stunting over the 4th FG’s airfield at Debden for a group of assembled press reporters and movie cameras.

Blakeslee immediately grounded Gentile as a result, and he was sent back to the US for a tour selling War Bonds.

His final tally of credits was 19.83 aerial victories and 3 damaged, with 6 ground kills, in 350 combat hours flown. He also claimed two victories while with the RAF.

After the war, he stayed with the Air Force, as a test pilot at Wright Field, as a Training Officer in the Fighter Gunnery Program, and as a student officer at the Air Tactical School. In June 1949, Gentile enrolled as an undergraduate studying military science at the University of Maryland.

On January 28, 1951, he was killed when he crashed in a T-33A-1-LO Shooting Star trainer, 49-905, in Forestville, Maryland, leaving behind his wife Isabella Masdea Gentile Beitman (deceased October 2008), and sons Don Jr., Joseph and Pasquale.

Gentile Air Force Station in Kettering, Ohio was named in his honor in 1962. The installation closed in 1996.

Winston Churchill called Gentile and his wingman, Captain John T. Godfrey, Damon and Pythias, after the legendary characters from Greek mythology. He was inducted into the National Aviation Hall of Fame in 1995.