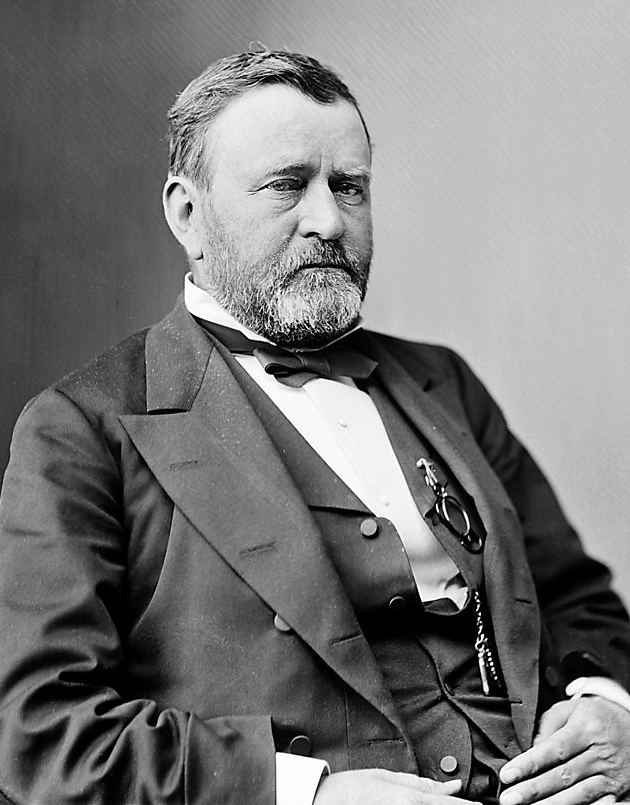 Ulysses S. Grant is considered by many to be as great and important an American as George Washington and Abraham Lincoln because of his success in preserving the Union, protecting the rights of the freed slaves and implementing reconciliation and reconstruction.

Hiram Ulysses Grant, as he was named, was born to hard working, industrious, middle class Americans, Jesse and Hannah Grant, on April 27, 1822, at Point Pleasant, Ohio. In a year and a half the family moved to Georgetown, Ohio, county seat of Brown County. There, Ulysses lived for the next 16 years, longer than he lived anywhere else.

In the 1820’s Georgetown and Brown County were Ohio’s last frontier. Young Grant attended the local schools, busied himself with chores, and became an industrious youngster. His ability to work with horses became legendary. Many of the traits Unat would serve him well during the Civil War were developed in Georgetown — common sense, determination. and perseverance. His experiences growing up were basic and clearly representative of the vast majority of Ohio youth in the early 1800s.

He attended schools in Maysville, KY and Ripley. OH where his life experience intertwined with John Rankin, famed abolitionist.

Ulysses was appointed to West Point by Congressman Thomas Hamer at the request of Jesse Grant, despite the fact that Hamer and Grant were political enemies. Grant had wanted to be a “down the river trader”, but agreed to attend West Point because “his father wanted him to.”

His career at West Point was unremarkable, except that he excelled in horsemanship and set a jumping record that lasted for 25 years. He also earned the friendship and respect of his classmates, many of whom would serve on both sides in the Civil War.

He served in the Army in the Mexican War, and though he was a regimental quartermaster, distinguished himself for bravery during the fighting.

He earned the respect of his fellow officers in the Mexican War that would serve him well in the Civil War.

Following the Mexican War, he married and was posted in New York and Detroit. He was later assigned to transfer his regiment to California across the Isthmus of Panama. Grant was responsible for arranging passage, transporting the regiment, it’s baggage, families and equipment. Malaria struck the regiment and Grant was hailed as a hero in seeing that the regiment reached California with a minimum loss of life.

While posted in California for nearly four years, Grant was unable to have his family at his side, and entered a period of great difficulty in his life. He resigned his commission and returned to his family, amid rumors of drinking, that would follow him until the end of the Civil War.

He returned to Missouri and his family and pursued farming, the real estate business and a variety of other jobs. The key pursuit of his life during this time was to enjoy the warmth of family life. He and Julia had a lifelong loving relationship despite many hardships, separation and constant relocation.

In April, 1861, when President Lincoln called for 75,000 volunteers, Grant was a clerk at his father’s leather goods store in Galena, Illinois. As the only professional soldier in Galena. he immediately volunteered to drill the local recruits. He could have stayed in Galena on the sidelines, but instead sought reinstatement as an officer in the regular army. He recognized the need and saw it as his duty to go back into the military service.

His accomplishments in the Civil War are well known. His method of waging war was followed by the United States in World Wars I and II. His recognition of President Lincoln as Commander in Chief, and their working relationship, became a model for future presidents and military leaders. His rank of Lt. General was equal to that of George Washington, and he was named the first Four Star General. He recognized what was required to win the Civil War and preserve the Union. His common sense, determination, and perseverance, were those same traits learned in Georgetown in the hills of southern Ohio. The terms of Lee’s surrender, drafted by Grant, that led to the end of the war, clearly facilitated reconciliation and reconstruction of the Union. In concluding the war, his goal was to preserve the Union.

In 1868, Grant was a reluctant candidate for president of the United States, but he saw it as his duty to continue to serve his country. He served two terms, the only president to serve two terms since Andrew Jackson.

During his two terms in office he accomplished the following:

Following his second term, he became the first president to travel abroad, and was received by the world’s leaders as an American hero.

No other Ohioan reached the military’s highest rank and also served as president.

President Grant was clearly a man of war, a man of peace, a statesman, and perhaps his greatest accomplishment was to become, in the closing years of his life, a man of letters. At the urging of Mark Twain, Grant wrote his memoirs. which is considered the greatest military histories ever written. Commercially, Grant’s memoirs were a phenomenal success. His purpose in writing his memoirs was to provide funds for his wife, Julia. Grant knew death was near as he wrote, and in the end won the greatest battle of his life.

In the first sentence of his memoirs, Grant declared “My family is American and has been for generations in all its branches, direct and collateral.” He was referring to his ancestry, but at the same time he was describing his patriotism.

There was a national outpouring of grief at his death in 1885 with military officers of both sides of the recent conflict serving as pallbearers at the ceremony. He is honored with a monument in New York City.