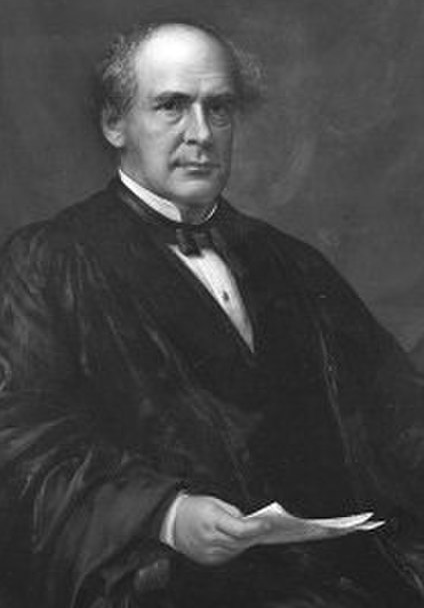 After economic crisis and the death of his father in 1820, 12 year-old Salmon P. Chase moved to Worthington, Ohio with his uncle, Bishop Chase.

Chase enrolled at Cincinnati College in 1823 at age of 15, after his uncle was appointed president of the institution. Chase and his uncle stayed at Cincinnati College for just one year. After his uncle, moved to England, Chase moved to New Hampshire with his mother and enrolled at Dartmouth College. Graduating Phi Beta Kappa in 1826, Chase moved to Washington, D.C. and established a private school for boys while he continued his studies. He passed the bar exam in 1829 and promptly moved back to Cincinnati where he opened a law practice.

In 1850, on the votes of the Free Soil-Democratic coalition, Chase was elected to the United States Senate.  In 1856 Chase was elected and served two terms as Ohio’s first Republican governor. Of special note, Chase was the first governor to occupy Ohio’s current statehouse. Although the construction of the statehouse was not completed until 1861, the governor, general assembly and Ohio Supreme Court moved into the building in 1857.

Chase returned to the U.S. Senate in 1860, but gave up his Senate seat to accept Abraham Lincoln’s offer to serve as the U.S. Secretary of Treasury.  Four years later, Chase was sworn in as the nation’s sixth Chief Justice on December 15, 1864.

Chase suffered a fatal stroke in New York City while visiting his daughter Nettie on May 7, 1873. On October 14, 1886, at the request of the State of Ohio, Chase’s body was returned to his home for burial and now rests at the Spring Grove Cemetery in Cincinnati. In 1894, a statue by Cincinnati native and Civil War veteran Levi Tucker Scofield, titled These Are My Jewels, was placed on the Ohio statehouse grounds. The statue features a life-sized sculpture of Chase and six other prominent 19th century Ohioans, including U.S. Presidents Grant, Garfield and Hayes.

In 1934 the United States Treasury honored Chase’s memory by placing his portrait on the $10,000 Federal Reserve note.