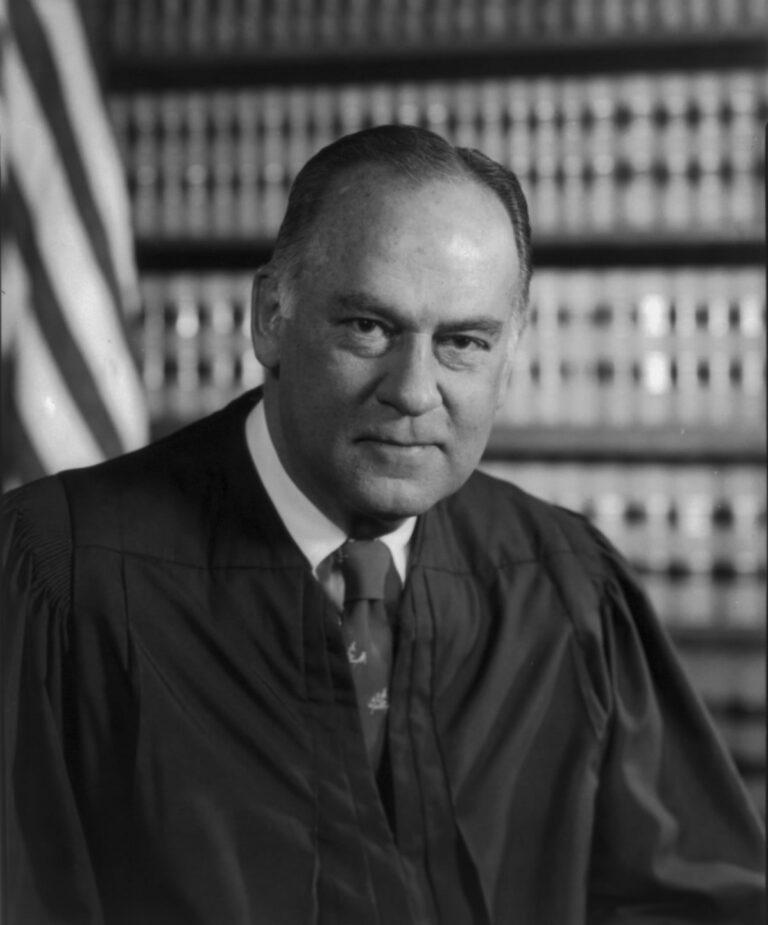 Potter Stewart, U.S. Supreme Court justice, was born in Jackson, Michigan, the son of James Garfield Stewart, a chief justice of the Supreme Court of Ohio, and Harriet Loomis Potter. Stewart was chairman of the undergraduate newspaper at Yale University, where he received a bachelor’s degree in 1937 and a law degree in 1941. After serving during World War II as a naval officer and attaining the rank of lieutenant junior grade, he entered private practice and local politics in Cincinnati.

In 1954, when Stewart was only 39, he was appointed to the U.S. Court of Appeals for the 6th Circuit. In 1958, President Dwight D. Eisenhower appointed him to the U.S. Supreme Court, where he served until his retirement in 1981. Although he had a background in Ohio Republican politics and was appointed to the Supreme Court by a Republican president known for his antipathy to judicial liberalism, Stewart was not a conservative justice. Rather, he followed a moderate, pragmatic approach that defied easy categorization. He believed that he should approach each case on its merits, without striving to further an ideological agenda. Over time, his practical approach marked him as a centrist who adhered to no particular wing of the court.

Stewart’s 23-year tenure on the Supreme Court roughly coincided with the eras of chief justices Earl Warren and Warren Burger. On the Warren Court, Stewart frequently stood outside the prevailing liberal consensus, particularly on matters concerning state criminal law enforcement. His centrist inclinations meant, however, that he also declined to align himself with the Burger court’s occasionally aggressive pursuit of politically conservative causes.

Stewart’s gift for aphorism yielded a memorable opinion in Jacobellis v. Ohio (1964), which, to his chagrin, survived as his most widely quoted judicial utterance: “I shall not today attempt further to define the kinds of material I understand to be embraced within [the term ‘hard-core pornography,’ to which the justice believed that state criminal laws in the area of obscenity were constitutionally limited]; and perhaps I could never succeed in intelligibly doing so. But I know it when I see it, and the motion picture involved in this case is not that.”

On the question of the constitutionality of the death penalty (which was ultimately answered in the affirmative), he insisted on scrupulous adherence to fair procedure and wrote that certain death sentences before the court were “cruel and unusual in the same way that being struck by lightning is cruel and unusual” (Furman v. Georgia [1972]).

In 1968, when Warren announced his intention to retire, Stewart removed himself from consideration for the position of chief justice, mindful of the internal dissension that had been generated when members of the court previously had sought the position. He later played a significant role in formulating the court’s unanimous opinion in Nixon v. United States (1974), which ordered President Richard M. Nixon to surrender to the special prosecutor the tape recordings whose disclosure later led Nixon to resign. He died in Hanover, New Hampshire.