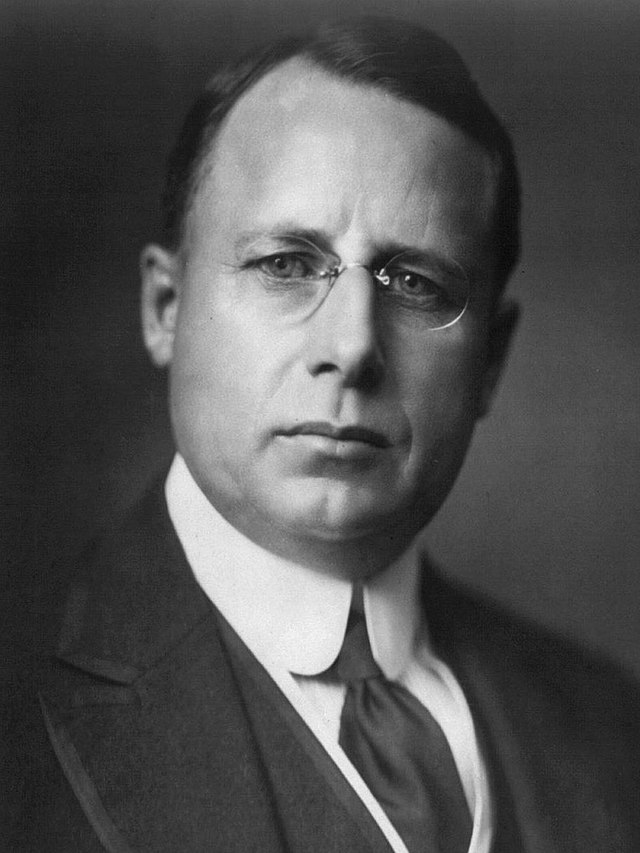 The late Governor James M. Cox is a prominent figure in Ohio history whose accomplishments continue to have impact on our society today. He served two terms in Congress, three terms as Ohio’s governor and ran for President of the United States (1920.) He founded the Dayton Daily News, now part of Cox Enterprises, a major media and automotive services company, and was a staunch community activist, as well.

Governor James M. Cox deserves the distinction of being recognized at the Statehouse as a recipient of The Great Ohioan Award because he upholds the historic character of this great state. His accomplishments in government, journalism and education make him worthy of such an honor at the capitol.

Governor Cox was “The Progressive Governor.” He signed legislation to establish compulsory Workmen’s Compensation. He was a proponent of child labor legislation to protect children against exploitation in the workplace and established widow’s pensions. He also pressed for prison reform and the expansion of modernization of correctional facilities in the early 1900s.

A former school teacher, Governor Cox established professional standards for teachers and promoted school reform that led to the establishment of county Boards of Education and the consolidation of schools to eliminate one-room schoolhouses.

His rise to the 1920 Democratic Party nomination as a candidate for the presidency was a testament to his political strength during those times. His running mate was Franklin D. Roosevelt. He was defeated by Warren G. Harding, but continued to serve the State of Ohio until the end of his third term as Governor. He then focused his attention on his growing media business, and was outspoken on issues of concern to the community.

His passion for journalism started at an early age. Born in Jacksonburg, Ohio, in 1870, Cox started his career as a teacher and taught in a local school while working for the Middletown Weekly Signal and later the Cincinnati Enquirer. In 1898 he bought the Dayton Evening News for $26,000, borrowing most of the money to do so.

The first issue of the Dayton Daily News was published August 22 of 1898. In 1949, he bought his two local competitors, The Herald and The Journal and merged them into the Journal Herald. Since those early newspaper days, the company has grown into one of the nation’s leading media companies and providers of automotive services. Today, Cox Enterprises has newspaper, television and radio stations, websites, and automotive auctions as well as cable, Internet and telephone operations.

Throughout its 110 years, Cox Enterprises has built its foundation on innovation, service, leadership, quality and growth to become one of America’s great media and automotive service companies. A number of Cox businesses continue to have operations in Ohio today, including Cox Communications, Cox Newspapers, Cox Television, Cox Radio, and Manheim. Combined, these business lines represent more than 2,600 employees in the state of Ohio. Cox Enterprises continues to be a family-owned business and is currently under the direction of Governor Cox’s grandson, James C. Kennedy, chairman and chief executive officer.

Cox Enterprises’ strength in communications continues in Ohio through Cox Ohio Publishing newspapers including the Dayton Daily News, Springfield News-Sun, The Middletown Journal and Journal-News in Hamilton along with weekly editions of The Pulse-Journal, The Western-Star, The Oxford Press and Fairfield Echo. WHIO-TV and WHIO-AM, WHKO-FM, WDPT-FM and WZLR-FM radio, in Dayton, and Cox Communications, a cable, Internet and telephone company in Cleveland, also are media and communications holdings of Cox Enterprises. Another Cox subsidiary, Manheim, the world’s leading provider of used vehicle services and a marketplace for millions of cars a year, has auctions in Cincinnati and Grove City.

Governor Cox’s passion for education and enthusiasm for communications are continued through the companies’ participation in the Newspapers in Education (NIE) program. ME strives to promote literacy and responsible citizenship in children and young adults through inclusion of newspapers with regular classroom curricula. Studies show that using the newspaper in the classroom on a consistent basis increases students’ reading, writing and critical thinking skills. Students using newspapers in the classroom also tend to possess greater awareness of local, national and global events, better background knowledge and stronger vocabularies. In partnership with educators, ME develops educational resources that allow teachers to easily integrate newspapers into their curricula. The NIE program has existed for more than 20 years and continues to grow. More than 2,000,000 newspapers are delivered to local Ohio classrooms each year. Cox Ohio Publishing pays all supporting expenses for the program, such as curriculum guides, supplements and workshops.

Governor Cox was outspoken as a newspaperman and stood up for the rights of people and the good of the community. He believed that a newspaper “should hold itself above the partisanships of classes and groups, for its right function is to bridge these gulfs with the tolerance and reasonableness without which our self-governing order cannot thrive.”

The same year that he first was elected Governor (1912), he and six other men signed the Otterbein Home Articles of Incorporation. The United Brethren Church of Christ purchased land from the Shakers of Lebanon in order to create the facility. The Otterbein orphanage and retirement home was to “provide a free home for old people, a free home for old ministers and their wives, a free children’s home (and) a free home for children of missionaries.” Now, nearly 100 years later, the Otterbein Retirement Living Communities is expanding and developing a new “Small House” series of communities that provide more personalized care for people in nursing and retirement homes. The Cox Foundation recently awarded $500,000 to the project.

Raised in the United Brethren Church of Christ, Governor Cox was known for helping people who were disadvantaged. He was appointed to the Otterbein board of trustees in 1913 and continued to serve through 1929, overlapping his years in politics and newspaper publishing. During that period, he also replaced the Jacksonburg United Brethren Church building in his hometown and it continues to be used by the Jacksonburg United Methodist congregation now.

Later, Governor Cox was recognized by President Woodrow Wilson and the American Red Cross for his leadership and contributions to the relief and recovery effort during the devastating Ohio floods of 1913.

The way he saw it, “If one tries to live up to it (a religious philosophy of thought and morals) to his utmost he will be happier himself, a better father, a better citizen and he will be more sightly in the eyes of others.”

Today, his legacy may be seen in Ohio in the many places and programs that carry his name — the James M. Cox Dayton International Airport, the James M. Cox Bicentennial Roadway, The Cox Arboretum, Cox Conserves (the company’s initiative to reduce its carbon footprint), scholarships and many other community service projects.