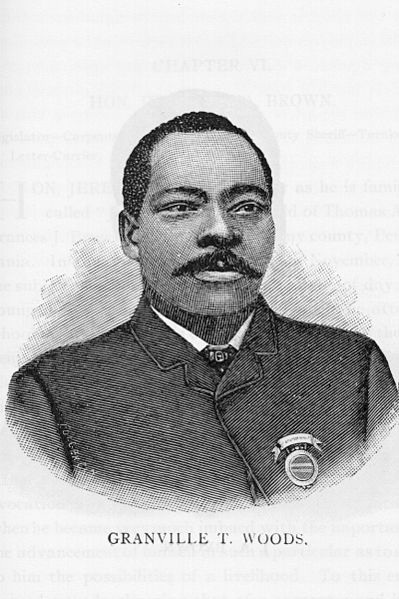 Granville Tailer Woods was an African-American inventor who held more than 50 patents. Most of his work was on trains and street cars. Woods also invented the Multiplex Telegraph, a device that sent messages between train stations and moving trains. Born in Columbus, Ohio, on April 23, 1856, Granville T. Woods developed a number of inventions relating to the railroad industry.

Granville attended school in Columbus until age 10 and then he served an apprenticeship in a machine shop and learned the trades of machinist and blacksmith. In 1872, Woods obtained a job as a fireman on the Danville and Southern Railroad in Missouri, eventually becoming an engineer. In 1876, he moved to Springfield, Illinois, and worked at a rolling mill, the Springfield Iron Works. He studied mechanical and electrical engineering in college from 1876-1878.In 1878, he took a job aboard the “Ironsides”, a British steamer, and, within two years, became Chief Engineer of the steamer. When he returned to America, he became an engineer with the Dayton and Southwestern Railroad in southwestern Ohio. In 1880, he moved to Cincinnati, Ohio and established his business as an electrical engineer and an inventor. After receiving the patent for the multiplex telegraph, he reorganized his Cincinnati company as the Woods Electric Co, but in 1892 he moved his own research operations to New York City, where he was joined by a brother, Lyates Woods, who also had several inventions of his own.

Woods developed several improvements to the railroad system, and was referred to by some as the “Black Edison.”

In 1885, Woods patented an apparatus which was a combination of a telephone and a telegraph. The device, which he called “telegraphony”, would allow a telegraph station to send voice and telegraph messages over a single wire. He sold the rights to this device to the American Bell Telephone Company. In 1887, he patented the Synchronous Multiplex Railway Telegraph which allowed communications between train stations from moving trains, a technology pioneered by Lucius Phelps in 1884.

Thomas Edison later filled a claim to the ownership of this patent. In 1888, Woods manufactured a system of overhead electric conducting lines for railroads modeled after the system pioneered by Charles van Depoele, a famed inventor who had by then installed his electric railway system in thirteen U.S. cities. In 1889, he filed a patent for an improvement to the steam-boiler furnace.

Granville Woods often had difficulties in enjoying his success as other inventors made claims to his devices. Thomas Edison made one of these claims, stating that he had first created a similar telegraph and that he was entitled to the patent for the device. Woods was twice successful in defending himself, proving that there were no other devices upon which he could have depended or relied upon to make his device. After the second defeat, Thomas Edison decided that it would be better to work with Granville Woods than against him and thus offered him a position with the Edison Company.

Woods is sometimes credited with the invention of the electric third rail, however, many third rail systems were in place in both Europe and North America at the time Woods filed for his patent in 1901. Thomas Edison had been awarded a patent for the third rail almost a decade earlier, in 1882.

Woods is also sometimes credited with the invention of the air brake in 1904 for trains, however, George Westinghouse patented the air brake almost 40 years prior
Over the course of his lifetime Granville Woods would obtain more than 50 patents for inventions including an automatic brake and an egg incubator and for improvements to other inventions such as safety circuits, telegraph, telephone, and phonograph. He died on January 30, 1910 in New York City, having sold a number of his devices to such companies as Westinghouse, General Electric and American Engineering.